My experience as Writer in Residence at Vancouver Public Library.

The four months I spent as Writer in Residence at the Vancouver Public library were wonderful. It was a privilege to have had this time with so many talented and enthusiastic writers and staff.

I went to Vancouver confident that I could carry out the responsibilities of the position, but uncertain as to how I would manage living in a big city by myself, something I had never done.

Meeting so many writers, learning about the library and my role in it, gave me a much-needed opportunity to discover who I was as teacher and mentor.

As I told a friend back home, I felt as if this job had been waiting for me.

The early days were filled with planning and the excitement of the launch and of course the expansion of the library into the upper floors. Thanks to the support and caring from people, like Barbara Edwards, I felt welcome and valued as a member of the team.

My inaugural talk was so important to me that I recorded it in the Inspiration lab of the library, simply to know how I sounded and if the content was right. After many hours of practice, I presented my talk. A short time into the presentation I realized that what I really wanted to do was to speak from the heart about romance writing and its importance in the reading life of so many people. It was one of the highlights of my time at the library.

As I prepared to go out to the other libraries in the system, I was anxious that I meet their needs and thus tried to adjust each presentation to the people attending the workshop.

It was in this environment that I experienced some of my most memorable moments.

I would like to tell you about the older gentleman who wrote the ‘show’ exercise I asked of the class, and he did a marvelous job. It wasn’t until I was leaving the library that the staff mentioned he was one of their regulars, and that he had given up his afternoon nap at home to attend the workshop.

The Carnegie library was memorable for many reasons, one being my trepidation at running the gauntlet to enter the library, past people who were clearly not coping well with life. As I passed them on the way out, my heart ached for them, and at the same time I felt blessed not to have found myself living in such circumstances.

It was also at the Carnegie library where I met an indigenous woman, a workshop attendee.

My topic that day was character and emotion and how they drive the plot of a romance. The woman sat through the entire presentation, not moving, while tears ran down her cheeks. When we about to finish up, I went to her. She told me that what I described she had never experienced, as such feelings were not tolerated in the school she’d been forced to attend. She went on to describe the generational impact of being raised in such emotional chaos. It was a humbling moment for me to face up to the fact that my culture had subjected her to such depravity.

My one-on-one experience showed me the high caliber of writers in Vancouver.

It was truly my pleasure to be involved in each person’s writing process.

Everyone I worked with needed something different from me. Some people simply needed help with story-telling, others were anxious to learn the difference between telling a story and showing the story, in what I like to call real time. There were others who were struggling to complete their manuscript with all the pressures of everyday life robbing them of the chance to continue their work in a meaningful way.

The two panel discussions were interesting to put together. Finding the right people to be part of the panel offered a challenge. But what was most rewarding was to listen to how writers and those attending these panel discussions saw the issues of diversity and the role of the modern romance heroine in today’s romance genre. I gained so much insight into how people view these issues as I listened to them speak on these two very current topics. I was thankful I had the opportunity to be part of it.

On a personal front, my daughter and granddaughter were able to visit me. My daughter had the opportunity to meet up with a student of hers from the college where she works. He was filled with praise for UBC and his experience of living in Vancouver. As a gay man he had struggled with the lack of acceptance in his home town in Michigan, but he felt accepted and included in Vancouver.

Through the four months of planning, preparation, and delivery of content, I have felt so much support and caring from the staff and from the writers I had the pleasure of working with.

I’d like to thank everyone for a wonderful four months. 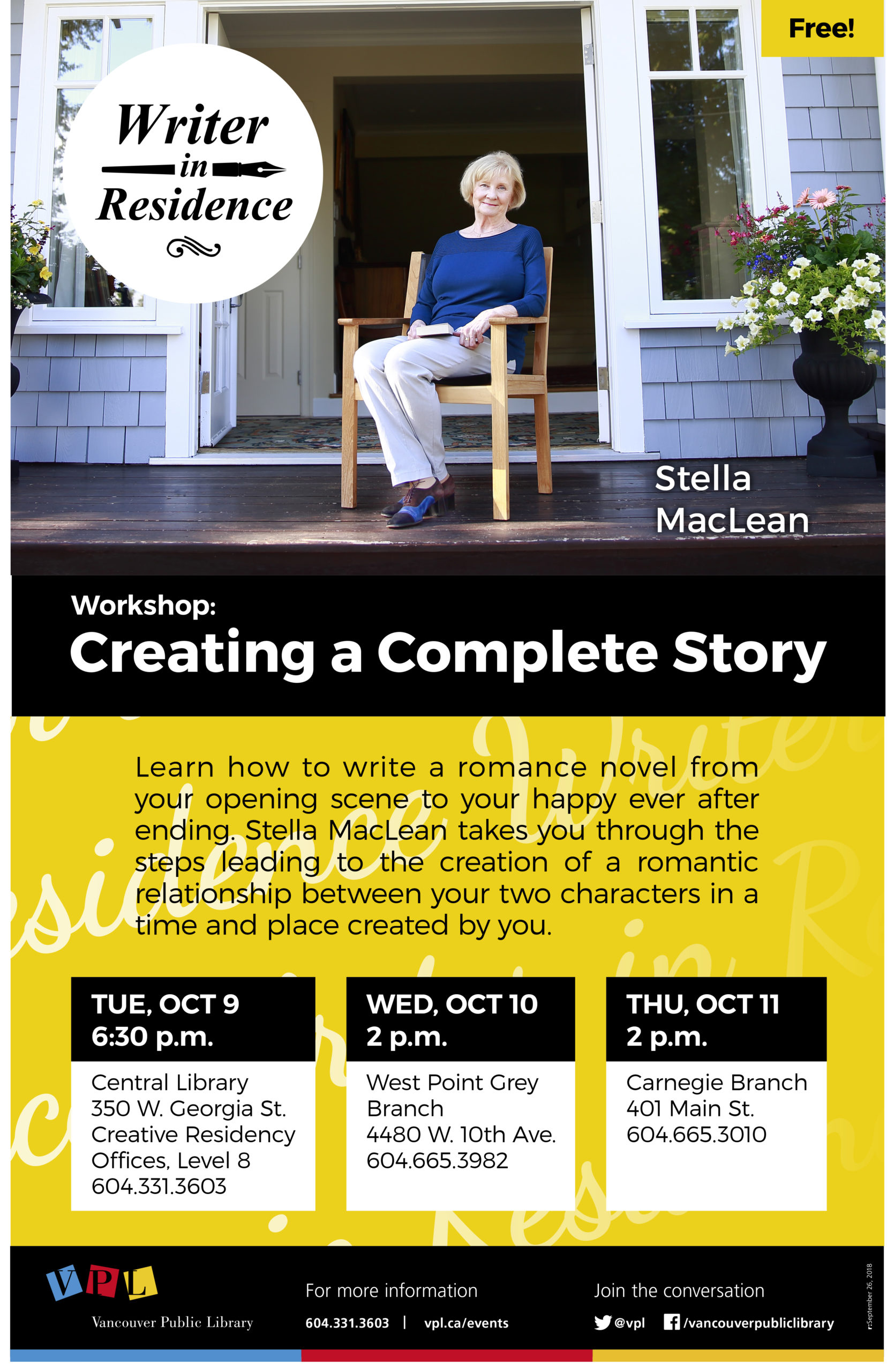