Read an excerpt below

“Life sucks,” Maggie muttered. She leaned against the counter in Sean O’Toole’s kitchen, shuffled the stack of bills and sipped the last of her coffee. Time was running out. With her lousy luck, in a couple of days her father would want to learn more about the great job she had been pretending to have, a job she’d touted as being far superior to the one she’d left behind in Boston.

On top of worry about her investment, she missed her four-year-old son Jeremy. She’d confided her problems in her mother who promptly offered to keep Jeremy while she sorted out the repayment of the money Sean O’Toole owed her.

She had to find Sean or face her father’s scorn when he found out she was working in a steakhouse as a waitress, and that her money and her business partner, Sean O’Toole, were nowhere to be found. She sighed, a sigh that turned into a groan at the unfairness of it all.

Of course, if she were flawlessly honest about it all, it was her unwavering attraction to bad boys that had caused the real problem. While still under the influence of Sean’s O’Toole’s exotic appeal, she’d let him sweet-talk her into thinking that Harry’s Place was one hell of an investment deal. At least she’d drawn the line where sex was concerned…one giant step forward in her life.

Later, excited about being part owner of what she thought was a thriving restaurant business, she’d come home to Portland to see how her investment in Sean’s business was going. She discovered that Sean had left town without a word of explanation, and no one knew where he was or when to expect him back. And she’d learned that Harry’s Place, her great investment, was on the financial skids…and Maggie’s money had vaporized.

She’d lain in wait for Sean to return. Well, not exactly lain—more like hidden out at his house…except when she worked at Harry’s Place. Since her arrival, she’d thought of little else except what she’d do when she caught up with the creep. Her fingers itched to grab Sean where it hurt most. His wallet.

Her shift at the steakhouse started in less than two hours, and she’d be damned if she’d let her money troubles ruin the rest of her free time. She planned to sun herself on Sean’s patio and let the sun’s warmth smooth away her worries.

She dropped the stack of bills on the counter and strolled through the living room into the sunroom. Sean might be a master con when it came to taking other people’s money, but he knew how to build a house with character.

Maggie planned to have a house like his some day, when her current rash of financial troubles were a distant memory. As she unlocked the patio doors, she gazed out over the perennial gardens and boxwood hedge that framed the lawn. At the edge of the lawn a man, decked out in black leather, stood talking to Edna Cotter. Maggie stared. Was he patting Edna’s pet skunk?

Nobody in his right mind patted Galahad.

Nobody in his right mind gave Edna Cotter an opportunity to ask questions either.

She should know. Maggie had learned that lesson the hard way. Her hastily constructed story about being Sean’s long lost cousin would not stand up under the most casual scrutiny. Certainly not under Edna’s ambush interrogation techniques. Maggie moved back from the door and watched. Edna seemed to be telling the stranger a story that required a lot of arm waving and hand movements.

A quick check of the man showed he had a high cuddle factor starting with a body that filled his black leather pants and jacket to perfection. Her pulse kicked up ten points at the mere thought of what his arms would feel like.

Give your head a shake!

“But it can’t hurt to window shop,” she murmured as she continued her perusal. His black hair flirted with the edge of his leather collar as he gave Edna a smile that would melt icebergs. Even with the door closed, Maggie could hear Edna’s giggle.

If this was the stranger’s doing, he was a man to avoid. God only knew, she’d had enough experience with sexy men in black to last her a lifetime.

Maggie steadied her stuttering pulse then turned away. The patio was definitely not a good idea.

A peel of laughter made her turn back. What now? She peeked one eye around the doorframe.

Despite her best efforts, her gaze moved to the stranger, up his broad chest to the links of gold at his throat, along his jutting jaw line and up to his eyes––that stared directly at her.

He smiled at Maggie and said something to Edna who promptly pealed off another loud hoot of laughter.

Unease swam in Maggie’s stomach as she watched them walk toward the patio, Edna clutching his arm while his broad smile ploughed into Maggie’s resolve. Should she sneak away, and not answer when they knocked? Something told her that this stranger wouldn’t be put off that easily.

Might as well face the situation head on. She opened the sliding glass door.

Edna warbled excitedly. “Maggie, come out here this minute. Have I got a surprise for you!” She swept across the patio and grabbed Maggie’s arm. “Your half brother just arrived. He didn’t want to disturb you. He thought you were sleeping. I told him you work some pretty strange hours at that saloon.”

“Oh, Sis, I’ve missed you so much. How have you been? That horrible hospital, those ugly white jackets and those strange padded little rooms. It must have been awful! You poor thing,” the stranger said as he left Edna’s side and rushed to scoop Maggie into his arms.

This man was a lunatic if he thought he could imply something like that in front of Edna and get away with it. Maggie ducked his outstretched arm, turned and slid her foot in his path, hoping he’d land on his ass, or crash into the patio door. The last thing she needed was another smart-mouthed con artist with a Tom Cruise smile and a Brad Pitt body.

He recovered easily, and before she could get out of harm’s way his arms enfolded her, pulling her into his chest in one sweeping move. “Say you missed me, Sis. I’ve missed you so much.”

His arms held her in a vice-like grip as his words slid into the space between them. “Play along with me. I’ve had a rough morning.”

“It’s about to get a whole lot rougher,” Maggie hissed as she stepped on his instep.

“Ohhhhh! That’s my favorite sister for ya.” The handsome stranger laughed and slid into a deckchair and plunked her down on his lap. His lips brushed her earlobe in a move that felt suspiciously like a kiss. A tingle rippled through her body like an ice cream soda’s fizz on a hot day.

“Try that again and I’ll put you over my lap and spank you,” he said, his lips hot against her cheek.

Maggie smothered the starburst sensation his lips had sparked, and glared at him. “Take your best shot, buster, but I wouldn’t give a girl like me such easy access to your family jewels. Know what I mean?” She glanced down in the general direction of his crotch. “You try spanking me, and I’ll have you singing soprano.”

“Don’t make promises you can’t keep,” he whispered close to her ear, his words punctuated with a look that would make a nun strip.

God, he was gorgeous! And the creep knew it! “Are you willing to take the chance?”

“Always. I love a woman who knows what she wants.” His fingers started caressing her butt. Her pulse tripped skyward along with her temper.

“If I were you, I’d be real careful around me. I don’t play fair.” She dropped the words just at the end of his nose and leapt out of his lap.

He crossed one leather-clad ankle over the other, leaned back in the chair and let out a long sigh. “This is heaven, Sis. But what a shame. Edna tells me our cousin Sean is away and has left you to housesit.” He winked at her. “And you not feeling well. What a bummer.”

A sharp retort, clarifying who was the real bum around here, flew to her lips, but she blocked it. He obviously knew her story about how Sean had asked her to housesit, thanks to loose-lips Cotter. At least the version she’d given Edna, minus the lock-picking stuff, of course. The mental hospital bit was his fabrication, and if he dared to stick around long enough, she’d make him pay.

But with her dismal luck, he also knew she wasn’t Sean’s cousin. Her mind scrambled over the possibilities, discarding all the options that came to mind. There had to be a way to send this man packing without making him too curious. She just needed time and a clear head to think about it.

In the meantime, she’d play along, and find out what the stranger was  doing  here.  Besides, any hint  that her story wasn’t true, would have Edna asking questions again. “Yes, our dear cousin Sean had to leave in a hurry.” Just ahead of the police, no doubt. “He asked me to look after things.”

“When do we expect him back, My Sweetness?” he asked, a cheeky grin on his face.

She resisted the urge to smack him one for his arrogance. That would come later—after Edna left. She shrugged as she gave Edna a quick glance. 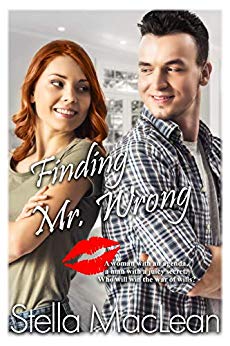