Elizabeth stood peering through the frost-etched window at the shining snow and sparkling branches of a Maple tree, her feet stinging from the cold her knitted socks could not ease. The tiny space contained an elaborate archway, a pretension of a half century before, a space with shelves that harbored not one book, a space where cold leaked in through buckwheat insulated walls, wind making the leaded glass shudder.

Yet, eight-year old Elizabeth cared about none of it. Not the cold, not the isolation of living on a dairy farm, or that everyone had been given their Christmas jobs in the house, with the warning that an unfinished Christmas job could make Santa unhappy. All she wanted was the blue metal record player she’d seen in the Stedman’s store.

If ever a heart yearned for something unattainable, hers did. She knew there was no hope that Santa would bring her a record player like the one in the store. Santa only filled a home knit stocking with socks and ribbon candy, and new hankies and an orange. Sometimes there would be a book whose pages were thick, whose words were squeezed into every line.

She knew this in the same way she knew that she would always have to share a bed with her younger sister, Sadie. There were good things about that, namely she wasn’t cold during the long winter nights. But the bad things far outweighed the good things. The worst bad thing being the thrashing and kicking her sister did all night long.

Yet, as she stared unseeing at the sparkling snow and bright blue sky she couldn’t help thinking about the wonders of the little blue box with its funny little metal arm hung over a vinyl record that played songs she’d never heard before in her whole life. She knew the hymns everyone sang at the Baptist church, as the organist pumped the aging wood pedals, that led to a slightly off-key song strung together by a medley of voices.

But those weren’t the songs she hankered for. She wanted the funny songs, ditties her mother called them. Songs about mice, girls eating pies, dogs and people telling joyous stories about a world she’d never known.

But, oh! The imaginings! That a cow jumped over the moon. She didn’t think it could happen, but she’d spent all last night watching the moon through the bedroom window when everyone else was asleep. She didn’t think it was possible for anything to jump over the moon, but she still liked the song. It had been playing the first day she’d crept away from her older sister Mary, whose job it was to watch over her during their visit to town on market day.

The next time in town when Mary met up with two friends on the sidewalk in front of the Stedman’s store, Elizabeth grabbed the chance to look one last time at the only Christmas present she’d ever wanted in her young life. Once inside the store she heard a song filling the air, coming from her beloved record player. She snuck closer to listen, to watch the clerk pick up the needle, turn the record over and play another light-hearted tune.

The opening lines of Rudolph the Red Nosed Reindeer lifted her tiny soul. She opened her mouth and belted out the words, not quite in time with the music. The clerk turned toward her, a faint scowl on his face. The man with a little girl standing near the record player turned to look at her as well. A woman holding a bolt of red flannel stopped, her mouth open in dismay.

Elizabeth stopped, looked about slowly, her cheeks burning bright in embarrassment. What if someone told her mother she’d been in here, without permission, singing ditties? Ever so slowly she backed away. Reaching the door, she hopped over the door sill onto the street, her eyes searching for her sister. Spotting her standing just feet away, she edged closer. Mary didn’t stop her chatter with her friends, which meant she didn’t know she’d been gone, and therefore she wouldn’t tattle to her mother about her visit to the store.

Now all that was needed, in Elizabeth’s mind, was to go home and plead with her mother one last time. She was sure her mother knew Santa, because she always seemed to know what Santa would do in any situation. Talking to her mother about the gift of her dreams one last time was her only hope.

And she did talk to her mother. She talked and talked, her mother’s glance swiveling from Elizabeth to the frying pan full of bacon sizzling on the woodstove, all the while giving nothing away. Finally, when her mother told her she needed to set the table for supper, she gave up. There was no hope anymore that she would ever have the record player. Ever.

That evening and the next day she tried to console herself by being as helpful as she could be. She helped Mary clean the ash out of the fireplace in the dining room. She dragged the dust mop over the dust bunnies under the beds. She even helped her mother pull the frozen sheets from the clothesline. Yet, no amount of tiresome work could stop the ache in her tummy, the pain of having to give up hope. There was nothing in her small world that would ever make up for not getting the record player.

If only she could see the record player one last time. Maybe the clerk in the store, if she was really nice to him, would play her favorite record: Peter Piper. She loved that tune the most because it was so easy to dance to the lyrics about a man picking a peck of pickled peppers, a dance she did in the secret of her room.

The next market day, she waited eagerly for her father to load the truck with all the things he had for sale that day. She and Mary were going to help him sell the last of the fir Christmas wreaths, her mom’s specialty, and the dozens of eggs she and her sisters had washed carefully so as not to break any. When her mother had asked that they pick up a spool of thread at Stedman’s her heart had nearly jumped out of her chest.

She worked hard arranging the wreaths on the wooden stand her father had made. All the while she ached to walk the block to see her record player. If no one was there she would ask the clerk to play Peter Piper. She would. She surely would.

When all the eggs and wreaths were sold, clutching the pennies for the thread in her fingers she raced for Stedman’s. Easing the door open she moved quickly down the aisle, past the enamel cooking pots, the cast iron frying pans, the packages of Surprise soap, her eyes fixed on the spot just beyond the boxes of Dustbane.

She stopped. The shelf lay bare. Its wood gleamed in the sun slanting in through the window.

The tears came first. Big gobs of them. Then her chest tightened. She must have cried out loud because the clerk came toward her down the aisle, a look of concern on his face, his words kind but pointless. There was nothing he could do. It was over. He’d sold her Christmas wish without a word to her. Swallowing hard, she made her way out of the store into the bitter cold of late afternoon, the bare trees stark against the gold-edged sun, the thread her mother needed forgotten. She didn’t notice it was getting dark. She didn’t hear her father’s gentle words of concern, nor her sister’s threat to tell her mother she hadn’t bought the thread. She didn’t hear anything, only the labored thud of her heart.

After the Christmas eve church service Elizabeth huddled near the woodstove, watching her mother and Mary put the special Christmas eve supper of meat pie and fruit cake on the table. When no one was looking she fed big chunks of each to Rover, the dog who was allowed in the house for that night only, who greedily ate from her fingers, licking them clean.

Upstairs, she carefully laid out her best white blouse with the lace cuffs and the navy wool skirt and white socks, all part of Christmas morning. She supposed she should be happy that tomorrow she’d see her cousins, get to eat her fill of turkey and mincemeat pie….

Once in bed, she curled up on her side as far from Sadie as she could get, her fingers pressed to her lips to keep from crying.

The next morning, she awoke to Sadie’s excited pounding on her arm with the whispered demand that she come downstairs and see what Santa brought. Elizabeth didn’t care about new socks or ribbon candy, or even the fresh orange all the way from Florida. She pushed her sister’s hand away, pulling the wool blanket and flannel sheet closer around her neck.

From down below in the front room she could hear squeals of excitement, talk of games, new boots and lots of laughter. There wasn’t usually this much excitement on Christmas morning. Santa didn’t bring games or boots for Christmas. She sat up, hugging her knees while she considered what this change might mean. She supposed she should get up and see what all the fuss was about. Reluctantly she crept from the bed, pulling her nightie around her and scuffing her feet into her lamb’s fleece slippers.

She was inching her way down the stairs, holding her disappointment at bay when she heard it: the wonderful sound of Rudolph the Red Nosed Reindeer floating up the stairs to greet her.

Her mother appeared at the bottom of the stairs, her eyes shining. Elizabeth’s heart pounded as she moved down the remaining steps and into her mother’s arms. Listening to her mother’s words about Santa knowing what she wanted, she pressed her face into the flannel front of her mother’s dressing gown. Santa had given her the best Christmas ever.

Book of the Month 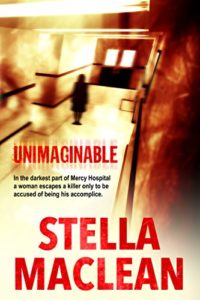